Chelsea Handler Raves About Tinder: 'It's Great... Almost Like A Prostitute' 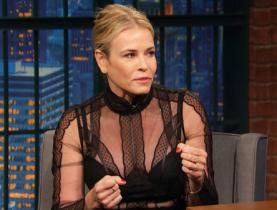 The comedian and talk show host says she loves using the app to hook up specially when she's travelling.

"I'm not attached to anybody. I'm single and I think Tinder is really that's what it's for," she says. "For when you're in cities that you're going to bounce."

"Like I'm not going to hook up in Los Angeles where I have my home. Here I'm in a hotel, I can go interview them in a bar, if I feel I'm so inclined. And I have done that. My last trip to New York was very successful."

"It is awesome," she continues. "I mean it's great that you can call somebody almost like a prostitute to show up at your hotel. I mean, as a woman, I'm like 'Bring that on! Yes!'"

Meyers, who's been in a relationship for eight years, admits he's a little disappointed that the app didn't exist when he was still dating so he could've been "so much more efficient."