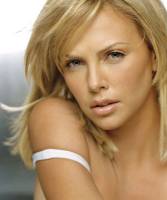 ) says she didn't really see her romance with Sean Penn blossoming the way it has.

The 38-year-old Charlize says she was "enjoying mommyhood," having adopted son Jackson in 2012, and wasn't really looking for a suitor.

"I know so well what I want to fit in my life. And the simple answer to that is: Unless he can make my life better? My life is really pretty f--king good," she tells Vogue.

"A friend kind of stepped into that role, and I really didn't see it coming. Sean and I have known each other for 18 years. We were just really good friends."

"And it's been slow going because you are aware that you could screw that up and lose it. We had to think about it. But at the end of the day, it was somewhat effortless."

"It just kind of naturally happened, and before I knew it, I was in something that was making my life better. The people who really love me can see the effect it's had on me."

Theron says it's a lot different dating in her late 30s than when she was younger.

"The last time I was dating, I was 24. I was like, 'Awww, you're miserable and moody, but I'm just going to forgive that because you're so cute! Oh, you treat me so badly, but maybe that will change in five years when I have your children!' That just doesn't exist anymore."

"I really do understand the importance and what that ceremony represents to so many people, but it's just such a personal thing," she says of marriage. "Let's put it this way: I never had the dream of the white dress. And watching other people getting married? I think it's beautiful for them, but to be quite honest, usually I'm sitting there just devastated."

"It's supposed to be this night of celebrating love, and all you see is a couple separated all night making sure everybody else is OK. It just looks like a lot of work. And as you get older, you start sifting through the stuff that really matters."