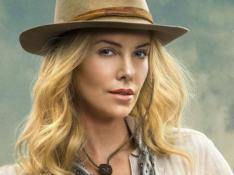 In an interview with UK's 'Sky News', Charlize Theron (photos

) compared the constant coverage in the media to "feeling raped."

Theron, who has been talking about her unexpected romance with Sean Penn while promoting 'A Million Ways to Die in the West', made the comment when asked whether coverage of her personal life bothered her.

"I don't look up myself online — that's my saving grace," said Theron. "When you start living in that world, and doing that, you start feeling raped."

"Well, when it comes to your son and your private life — maybe it's just me. Some people might relish in all that stuff but there are certain things in my life that I think of as very sacred and I am very protective over them," said the 38-year-old.

"I don't always win that war, but as long as I don't have to see that stuff or read that stuff or hear that stuff then I can live with my head in a clear space, which is probably a lot healthier than living in that dark room."

) was called out by Cindy McCain for comparing bullying to war.

In a statement, the Rape, Abuse and Incest National Network (RAINN) said the South African actress could have used a better metaphor.

"We wish Charlize Theron had used a more appropriate metaphor to describe the experience of being a celebrity in the era of digital media. The horror of being raped should never be compared to the 'unpleasantness' that someone could experience searching themselves."