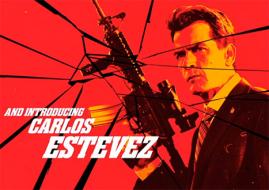 The revelation comes in an image from the project that reads "Introducing Carlos Estevez."

Sheen likely made the choice after deeming it a good fit for the action film from the Mexican-American director. It is the second in a series that started with the 2010 film 'Machete'.

In an interview with Univision last year Sheen said he didn't associate with his birth name: "I don't wake up feeling Latino. I'm a white guy in America," he said.

"I was born in New York and grew up in Malibu. I wish I spoke more Spanish. I'm sure I can learn, but there hasn't been a lot of time lately. It was never a part of my life growing up. My parents never infused it into our household."