Charlie Sheen To Be Charged With A Felony Over Attack 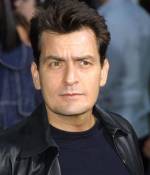 Charlie Sheen will be charged with felony menacing over the Christmas Day incident which saw him threaten wife Brooke Mueller with a knife to her throat.

The 'Two and a Half Men' star, one of the highest paid stars on television, will also be charged with misdemeanor assault, according to law enforcement sources.

The criminal complaint will be filed either late Friday or early Monday morning. Sheen will then appear in court on Monday for an arraignment, where he is not expected to enter a plea.

The judge will also hear arguments from the couple's lawyers to relax the protective order, which currently prohibits any contact between the two. Both Sheen and Mueller have said they want the order lifted so they can mend their marriage.

Sheen allegedly choked Mueller then put a 4-inch switchblade to her throat and threatened to kill her after she said she wanted a divorce. The 44-year-old claims they only traded slaps on the arms.

Legal experts believe it's unlikely Sheen will do time if convicted, but he could be fined up to $100,000.