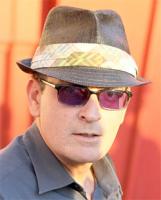 Charlie Sheen told his fans to send "dog sh-t" to his 9-year-old's school after she was "bullied out of Viewpoint school and then called a liar."

"Cadre! This is a legitimate call to arms," the furious Sheen said on Twitter. "My daughter Sam was bullied out of Viewpoint school and then called a liar. It's on!"

"If you have a rotted egg a roll of toilet paper or some dog sh-t, I urge you to deliver it with 'extreme prejudice' to their KamPuss run by trolls and charlatans, Make me proud."

"We will not tolerate this level of abhorrent disrespect towards the child of your favorite Warlock," the 47-year-old continued. "And if your feeling the 'show and tell' of it all, Smear the sh-t to spell one name on the front door; VICTORIA. Eat that loser."

The school has since released its own statement giving, shall we say, its own "view point" on the accusations.

"Viewpoint School's highest priority is the safety, security and education of our students. Like all responsible schools across our nation, we are concerned when any individual uses a social media forum to encourage actions that may risk the safety and security of any school," reads its statement.

"Our administrators addressed the issue appropriately at that time. Our School takes accusations of bullying very seriously. For over 50 years, Viewpoint School has provided a safe and nurturing environment for our students to thrive, and we will continue to do so."

Sheen says the school "should be ashamed of itself for allowing the bullying to go on and try to hide it."