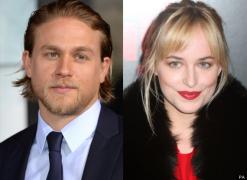 Despite backlash from fans over the casting, Charlie Hunnam says he's excited to bring Christian Grey to life in the 'Fifty Shades of Grey' feature film.

"I met with director Sam Taylor-Johnson a couple of times. She'd asked to meet me and we talked at length about the role, the movie and what her intention was," the 'Sons of Anarchy' star said on the show's red carpet for its season six premiere.

"I felt really intrigued and excited about it so I went and read the first book to get a clearer idea of who this character was, and I felt even more excited at the prospect of bringing him to life."

"There's just like a tangible chemistry between us. It felt exciting and fun and weird and compelling."

Although his girlfriend of seven years, Morgana McNelis, understandably, didn't share the same excitement at first.

"I didn't tell her the news, she was a part of the decision-making process," he said. "It's very hard to be with an actor. She's required to share parts of me that she wouldn't really want to share so of course with the nature of this role that's going to be times ten."

"So it was a decision we made together but you know, she loved the books, she read them and loved them and she was really excited at the potential of this opportunity for me and if anything I think it will bring us closer."

Hunnam says the scenes in the book didn't make him shy away from the role.

"If you look back in my history, my first job was on a channel 4 miniseries called 'Queer as Folk' and it was incredibly explicit sexual scenes with a man," he said. "So if I could do it when I was 18 with a guy I could certainly do it at 33 with a lady."