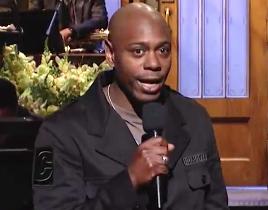 "You know, I didn't know that Donald Trump was gonna win the election," he said. "I did suspect it. Seemed like Hillary was doing well at the polls, and yet, I know the whites. You guys aren't as full of surprises as you used to be. We've actually elected an Internet troll as our president."

"I haven't seen whites this mad since the O.J. verdict," he said of the protests. "I'm not saying I'm enjoying it. I'm just saying I've never seen it before."

"I watched a white riot in Portland, Oregon, on television the other night. The news said they did a million dollars' worth of damage. Every black person was watching that like, 'amateurs.'"

Chappelle then spoke about some of the other issues in the country including mass shootings.

"There are more shootings than I can literally count. You can't even go to the goddamn zoo without seeing a shooting nowadays," he said. "They shot a gorilla at my local zoo. And the Cincinnati police said, 'Shooting that gorilla was the toughest decision we ever had to make.'"

"I said, 'Well, you bout to see a lot of n---as in gorilla costumes in Cincinnati."

He wrapped: "I'm wishing Donald Trump luck, and I'm going to give him a chance. And we, the historically disenfranchised, demand that he give us one too."

The comedian also brought back signature characters from 'Chappelle's Show' for a 'The Walking Dead' spoof.