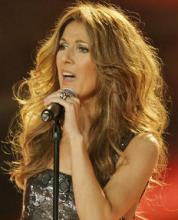 Celine Dion returned to the Las Vegas stage and paid tribute to those affected by the mass shooting at the Route 91 Harvest Festival.

"On Sunday, we lost too many beautiful, innocent souls, and so many are still suffering, but tonight we're going to let these families know that we are supporting them and that we will help them through their tragic loss," Celine told the audience.

"We dedicate tonight's show to all of the victims and their families, and to the first responders, and to the doctors and nurses who are working around the clock to save lives, and to so many heroes who did whatever they could to help complete strangers in a time of desperate need."

The singer, who stood on stage with Vegas Strong signs on the big screen, announced that she would donate all proceeds from the concert to the victims of the shooting.