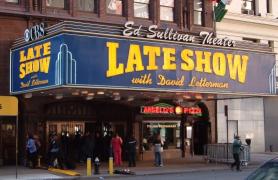 CBS has confirmed that Stephen Colbert's 'Late Show' will stay at the Ed Sullivan Theatre.

The Comedy Central host, who will take over the show next year, already tapes 'The Colbert Report' in New York.

"David Letterman has graced this hall and city with comedy and entertainment that defined a generation. When Dave decides to pass the baton next year, we look forward to welcoming Stephen Colbert, one of the most innovative and respected forces on TV, to this storied television theater."

"I would also like to applaud Gov. Cuomo for all that he has done to keep New York a vibrant and attractive location for all forms of television production. We're excited to be here in late night for many years to come."

If you're wondering what Cuomo has done, CBS will receive up to $11 million in tax credits for keeping the show in New York and another $5 million in grants for renovating the theater.