CBS Greenlights Pilot For Own Version Of Modern Sherlock Holmes 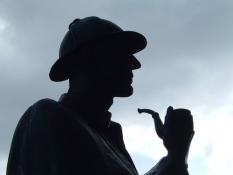 After watching the success of BBC's 'Sherlock', CBS has given the go ahead to its own retelling of the famed detective.

Tentatively titled 'Elementary', the project will be a modern take on the cases of Sherlock Holmes told in the setting of modern day New York City.

Sarah Timberman, known for her work on 'A Gifted Man' and 'Unforgettable', and Carl Beverly have been lined up as executive producers on the project.

CBS is probably hoping to capture a share of the renewed interest in Sir Arthur Conan Doyle's character given the recent films and the British 'Sherlock', which concluded its second season with some of its highest ratings ever.

Although it will be impossible to live up to the expertly crafted and acted BBC series, the truth is CBS will be pleased to end up with another solid procedural for its schedule out of it to replace the aging 'CSI' franchise.