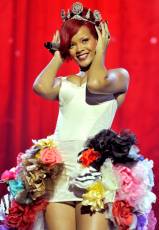 ) out of its Thursday night NFL broadcasts after the singer slammed them for pulling it from the launch of the program last week.

The introduction segment was to feature Don Cheadle narrating over the Jay Z and Rihanna's 'Run This Town' duet.

But CBS made the decision to scrap it out of the inaugural telecast following the leak of a video showing Baltimore Raven Ray Rice knocking his wife unconscious due to Rihanna's own history as a victim of domestic violence.

The network had planned to run it in following weeks. However, that won't be happening after the singer slammed CBS for leaving her out of the kickoff.

"CBS you pulled my song last week, now you wanna slide it back in this Thursday? NO, F--- you! Y'all are sad for penalizing me for this," Rihanna said on Twitter. "The audacity ..."

In response, CBS said it would drop the song altogether.