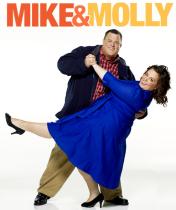 CBS pulled what was to be Monday's 'Mike & Molly' season finale because it's plot revolved around a tornado hitting Chicago.

This after a devastating tornado left at least 24 people dead and injured 230 people in the Oklahoma City area. The death toll number was revised down from 51 by the state medical examiner's office on Tuesday morning.

A repeat broadcast of 'Mike & Molly' ran in place of the episode titled 'Windy City'.

The official description for the episode was as follows: "Mike and Carl get stuck working at the Renaissance Faire after their boss, Patrick, gets dumped by Mike's mother. Later, as a tornado descends on Chicago, Mike and Molly each confess important news to each other."

An CBS spokesperson says the season finale will be broadcast "at an appropriate date."