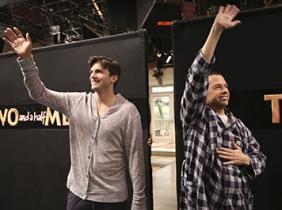 CBS has announced that 'Two and a Half Men' will conclude its 12th and final season with a special one-hour series finale on Thursday, February 19.

The comedy, starring Ashton Kutcher and Jon Cryer, ranked as television's most watched comedy for five consecutive seasons from 2005-2006 through 2009-2010.

It has maintained solid numbers since Kutcher took over for Charlie Sheen but is no longer regarded as the hit it once was. Upon its completion, 262 episodes will have aired.

CBS' Nina Tassler has said that "Chuck Lorre is creating a season-long event. We did very well last year with announcing the final season of How I Met Your Mother here too. Chuck is very psyched about this; he's got some great ideas and very big surprises."

Meanwhile, a remake of 'The Odd Couple', starring Matthew Perry as endearing slob Oscar Madison and Thomas Lennon as uptight neat freak Felix Unger, will make its series premiere on the same day 'Men' wraps up.

It will air between an original episode of 'The Big Bang Theory' and the 'Men' series finale.