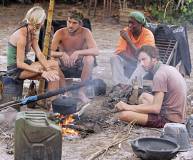 The simultaneously charming and strategic Southern boy came out as victorious after earning a unanimous vote from a jury of seven previous castoffs. And as if a million dollar prize wasn't enough, host Jeff Probst also named the well-liked 24-year-old champ the fan-favorite and recipient of the $100,000 prize.

JT played the game as well as you could -- winning immunity when it mattered, making key decisions that played on his favor in the end, and remaining untouchable throughout the entire finale by winning the immunity idol twice and taking all seven votes in the final tribal council.

He even earned Taj's vote, who was blind-sided earlier in the night, minutes after remarking "I know these guys have my back." The next immunity challenge was far more nerve-wracking for JT. Even with his close partnership with Stephen since day 3, he knew if he lost, there was a good likelihood he would be going up because, as his alliance partner put it, no one could beat him in the finals.

JT battled with the decision on whether to take Erinn, which would almost certainly guarantee him the money, or loyal ally, Stephen, who would pose much harder competition. But in the end JT went with his heart and decided to stay true to his word, snuffing Erinn's torch.

The bromance briefly hit a sour note when Debbie asked Stephen if he would have chosen JT over Erinn had he won immunity, and the New Yorker revealed he would have taken Erinn. "I just feel like a fool, man," said JT. However, it was all forgotten by the end of the night and the rancher even hinted as a possible business venture together because he was grateful they made it so far together.

The 'Survivor: Tocantins' winner welled up as the votes were read: "I can't help it. I'm happy. It's probably the happiest I've ever been in my life, obviously."

Probst asked Coach to take a lie detector test to back up his infamous Amazon story, which he refused. But Coach had a surprise -- he said he privately took the test and brought a sealed envelope to prove it. "I believed you all along," Probst responded.

Reaction from the crowd was mixed, and lie detector or not, we're still not buying it. But his 'lady friend', who was at the live reunion, had the best line of the night. Asked whether the 'dragon slayer makes it into the bedroom,' she quipped "actually, in the bedroom I slay the dragon."

Jeff revealed Survivor 19, which returns to CBS in the fall, will see the castaways in Samoa, located in the South Pacific Ocean.