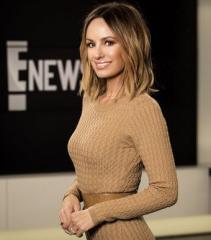 Sadler says the gig had been her dream job: "I'm from Indiana, born and raised, and I had my sights set on E! and I've seen the world. I've had the best experiences. I've gotten incredibly close with all of my co-workers."

"It's like a family here... It has almost been surreal. But then, this year happened."

Sadler says in the process of talks to extend her contract this year she was "informed and made aware that my male equivalent at the network who I started with the same year and have come up with doing essentially similar jobs, if not the same job, wasn't just making a little bit more than me but was making double my salary and has been for several years."

"That was really hard to swallow, but you know information is supposed to be power and when my team began negotiations knowing what we knew, that was the barometer in which I expected to be paid, based on the law and based on what I know to be fair. And what I believe in my heart of hearts is reasonable."

Sadler says she decided to leave after “not only did they refuse to pay me as much as my male counterpart, but they didn't come close — nowhere close, not even remotely close."

"It's almost insulting because you know you work really hard. I'm a single mom of two kids. I've given my all to this network. I've sacrificed time away from my family and I have dedicated my entire career to this network," she explains.

"And when you learn something like that, it makes you feel very small and underappreciated and undervalued. It's heartbreaking."