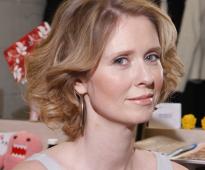 Cynthia Nixon is taking some flak for a recent interview with New York Times Magazine in which she said homosexuality "is a choice."

In fairness, the former 'Sex and the City' star was careful to say that it was a choice for her and isn't for many others, but celebrity chef Cat Cora says she shouldn't have made the comment at all.

"I gave a speech recently, an empowerment speech to a gay audience, and it included the line 'I've been straight and I've been gay, and gay is better.' And they tried to get me to change it, because they said it implies that homosexuality can be a choice. And for me, it is a choice," Nixon said in the interview.

"I understand that for many people it's not, but for me it's a choice, and you don't get to define my gayness for me. A certain section of our community is very concerned that it not be seen as a choice, because if it's a choice, then we could opt out."

"I say it doesn't matter if we flew here or we swam here, it matters that we are here and we are one group and let us stop trying to make a litmus test for who is considered gay and who is not."

"I am very annoyed about this issue. Why can't it be a choice? Why is that any less legitimate? It seems we're just ceding this point to bigots who are demanding it, and I don't think that they should define the terms of the debate."

Cora, who is openly gay, said on 'The Talk' she "was born this way."

"So, I really feel like it was dangerous and irresponsible of Cynthia, especially in this environment today when so many young people are taking their lives," she explained.

"I know growing up as a young gay person how much you hate yourself, how much you already think you're different. And for someone to say, 'It's a choice, you can be this way or that way,' I think it's dangerous and I ask Cynthia to please, reach out to the community and say to all the people who do hate themselves right now, all the young kids who are impressionable 'You're OK, take it one day at a time.'"

The Talk's co-host Sara Gilbert was more willing to hold judgement as she pointed out Nixon has been in long-term relationships with both men and women.