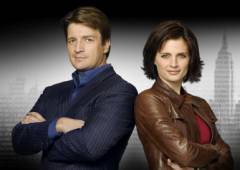 After hitting a series high with this week's conclusion of the two-part serial killer episode, 'Castle' has officially been renewed for a 22-episode third season.

What a difference a strong lead-in makes. The mystery-comedy, starring Nathan Fillion and Stana Katic, has been on a recent ratings surge thanks to ratings juggernaut 'Dancing with the Stars'.

This week's episode was seen by 14.5 million viewers, which not only made it the most watched show in at 10 PM but also gave ABC its best scripted performance in the timeslot since 1996.

Steve McPherson, ABC's president of entertainment, says they "believed in 'Castle' and its team from the beginning and have patiently built it into the hit we knew it could be."

"Not only does the audience get bigger each week," he adds, "the show gets better every year, and we're looking forward to an incredible third season."