Carrie Fisher Once Wrote Her Own Obituary: 'Strangled by My Own Bra' 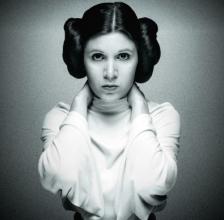 There's no denying that Carrie Fisher had a sense of humor. In fact, the actress joked about what she wanted in her obituary.

Fisher wrote in her 2008 autobiographical book, 'Wishful Drinking', that she would want it to say that she was "strangled by own bra."

"George Lucas comes up to me the first day of filming and he takes one look at the dress and says, 'You can't wear a bra under that dress .. because there is no underwear in space,'" Fisher wrote.

"I promise you this is true, and he says it with such conviction too! Like he had been to space and looked around and he didn't see any bras or panties or briefs anywhere."

Lucas joked that if she wore underwear in space and her body expanded, she would "get strangled by my own bra."

"Now I think that this would make for a fantastic obit," Fisher said she laughed in the white dress she wore as Princess Leia. "So I tell my younger friends that no matter how I go, I want it reported that I drowned in moonlight, strangled by my own bra."

Fisher passed away on Tuesday at the age of 60, days after suffering a heart attack on her flight from London to Los Angeles.