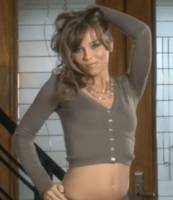 Appearing on ABC's 'Good Morning America' on Monday, Anderson said Sheen yelled racial slurs, threw a lamp at her and grabbed her by the throat.

The 45-year-old actor was briefly hospitalized after security at the Plaza Hotel reported he was disorderly and had broken furniture in his room and called police. His publicist, Stan Rosenfield, claimed Sheen had an adverse reaction to medication but no one believed that for a minute.

Anderson told George Stephanopoulos that she had been hired for $3,500 to join Sheen for dinner. Although she continues to maintain that it's 'absolutely untrue' that the deal included sex.

"It's hard to say, being that it was my first time hanging out with him, if it was normal everyday behavior for him," she said. "He was fairly intoxicated... but there was a little bit of romance, if you will."

"Towards the latter half of the night, it got really bad. He started yelling racial slurs, But it wasn't until he put his hands around my neck that I really thought to myself, you have gotten yourself in a bad, bad situation. At that point things began to very rapidly kind of fall apart and just really get out of hand."

When she attempted to gather her belongings and leave, he threw a lamp at her, she said. So she locked herself in the bathroom and used her cell phone to call a friend.

She also told Stephanopoulos that the actor snorted "a white powdery substance."

Sheen has offered "a sum of money" she didn't specify for her silence, but she claims that she doesn't want any of it.

Meanwhile, in a statement, Sheen's attorney has blasted her claims as "completely false."

"Ms. Capri never made any allegation to the police of any wrongful conduct on the part of Mr. Sheen on the night of the incident and she had every opportunity to do so," says Yale Galanter. "She has been to a number of law firms who have refused her case because they doubt her credibility."

" A number of news organizations have refused her story for the same reasons. If she pursues legal action, we will defend this vigorously. These allegations against Mr. Sheen are completely false, and are a blatant attempt to cash in on his celebrity."