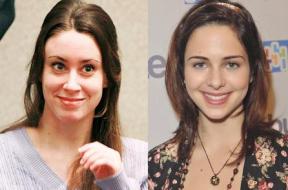 Canadian actress Holly Deveaux has been cast to play Florida mother Casey Anthony, who was acquitted of murdering her 2-year-old daughter Caylee, in a made for television Lifetime movie.

The 19-year-old Deveaux will star alongside Rob Lowe, Elizabeth Mitchell and Oscar Nunez.

"It's nerve-wracking to combat such a controversial issue," says Deveaux, "The outpouring of negativity for Casey Anthony is unlike anything we've seen in the media in years."

"I'm not going to make her into anything she is not. The fact of it, beyond any verdicts in court, is that she was someone struggling through what was undoubtedly the most difficult trial of a lifetime."

Lowe will portray prosecutor Jeff Ashton, Mitchell will take on the role of fellow prosecutor Linda Drake Burdick and 'The Office's Nunez will be defense lawyer Jose Baez.

The film will primarily focus on the behind the scenes of the trial related to Caylee Anthony's murder and death.