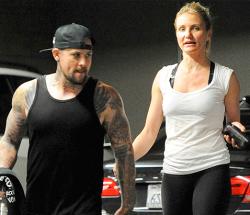 ) married 'Good Charlotte's Benji Madden in a ceremony at her Beverly Hills home on Monday night.

The couple had reportedly been planning the ceremony for weeks telling everyone it was a pre-Golden Globes party. Diaz, 42, and Madden, 35, became engaged just a few days before Christmas.

The move marked a turnabout for Diaz, who had maintained getting married wasn't on her to-do list.

"I think the big misconception in our society is that we're supposed to meet the one when we're 18 and we're supposed to get married to them and love them for the rest of our lives. Bulls—t," she said a couple of years ago to UK's 'Stylist' magazine.