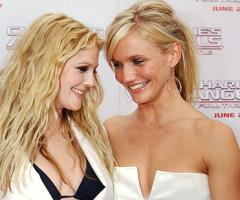 ) abruptly ended a radio interview on Tuesday after the host joked about best friend Drew Barrymore's past drug use.

Trouble on 'Kyle and Jackie O radio show' began when Jackie O made a comparison between Giselle Eisenberg, the actress who plays Diaz's daughter in 'Sex Tape', and Drew Barrymore in 1982's 'E.T'.

"Oh yeah that's cute, yes, she does now that you mention it, and she's as bright and lively as Drew is as well," Diaz replied. "She's a sweet little girl."

But host Kyle Sandilands then quipped: "Let's hope she misses out on the Drew Barrymore drug years, because those were a great thing to watch, but not so good to be in, I'd imagine."

"I'm sure Kyle you've never been through a drug phase, have you?," Diaz sniped back. "Or alcoholism, or anything like that. You're pretty clean? Always did it right? Congratulations."

"Hang on a second, but I'm friends with Benji," was all Sandilands could muster, referring to Diaz's boyfriend Benji Madden.

Jackie O tried to change the topic back to the movie but Diaz interjected: "We have to go now... sorry, they're wrapping us up."

When the show returned, Sandilands was taken to task by Jackie O, who commented: "You ruined that interview… you brought up Drew Barrymore, her best friend's drug addiction in the past. She's her best friend! And then you brought up Benji. We all know how protective Cameron is about her private life."

But Sandilands was unapologetic and said: "Maybe, they should've just bought ads if they wanted to sell the movie."

Cameron Diaz and Jason Segel's 'Sex Tape' has flopped with a No. 4 debut with just $15 million at the box office in its debut.