A prominent Chilean fashion designer has sparked outrage in by dressing up models like the Virgin Mary -- with one difference -- ample cleavage.

Ricardo Oyarzun even has the Roman Catholic Church furious and they've condemned his plans for a show featuring the models.

"There is no pornography here, there's no sex, there are no virgins menstruating or feeling each other up," Oyarzun tried to defend his catwalk show in the local media. "This is artistic expression."

Although he admits his designs, which includes religious icons, were inspired by the Virgin Mary, Oyarzun says they were not intended to represent her.

A member of Catholic bishops says such a presentation is almost insulting: "We look on with special pain and deplore those acts which seek to tarnish manifestations of sincere love toward the Virgin Mary, which end up striking at the dignity of womankind by presenting her as an object of consumption."

Depictions of religious figures have become an increasing hot button topic in the last few months. You may recall the Virgin Mary nude cover which prompted an apology from 'Playboy' headquarters just month.

Check out one of the busty Virgin Mary models from an ad below: 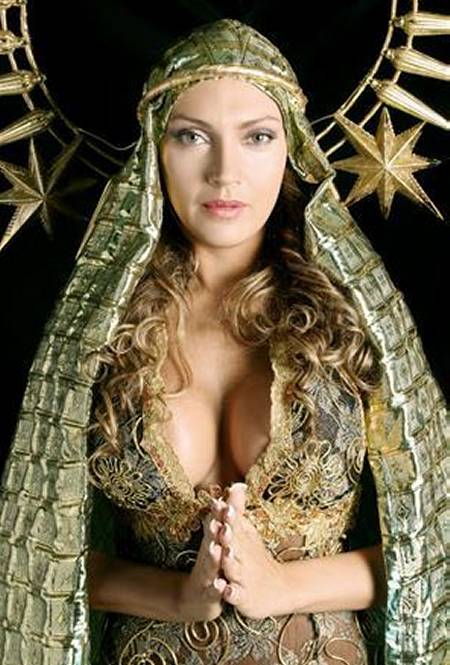