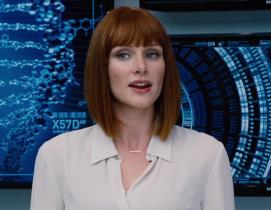 ) for years, one fan has made a tongue in cheek song about the resemblance.

Sung from the perspective of Bryce Dallas Howard, the musical number seeks to remind us that "I'm not Jessica Chastain."

Except after seeing the pair in several clips, it could leave you slightly more confused about which one was which.