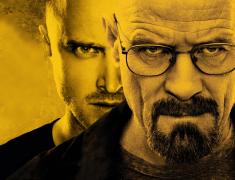 'Breaking Bad' definitely isn't a drama for the faint of heart and Bryan Cranston's daughter found this out first hand.

Cranston's teenage daughter, who was attending the fourth-season premiere of the AMC drama, fainted during after a gory scene near the end of the episode.

After staff noticed the star's 18-year-old daughter had fainted in her seat, they interrupted the screening and turned the lights back up.

A doctor was called to the scene and once Taylor was taken out to be attended to, the screening was resumed.

'Breaking Bad' tells the story of Walter White, played expertly by Bryan Cranston, a struggling high school chemistry teacher who turns to a life of crime after being diagnosed with advanced lung cancer to secure his family's financial future.