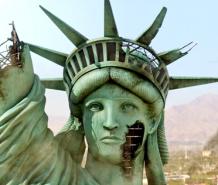 The first trailer for the Gareth Edwards directed 'Godzilla', which promised a more grounded take on the famous monster, was released way back in December.

Now Warner Bros. and Legendary Pictures have finally released a second trailer that takes a more foreboding look at what the beast has in store.

"The arrogance of man is thinking nature is in our control and not the other way around," Watanabe says in the trailer.