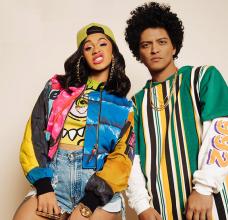 Bruno Mars has released a remix of his 2016 song 'Finesse', featuring 'Bodak Yellow' rapper Cardi B.

Originally released on Mars' 2016 album, 24K Magic, the song has a new beat and drums.

Cardi B wears a yellow printed crop top and high-waist cutoff denim shorts with large hoop earrings and a baseball cap while Mars sports a vertical striped T-shirt over a white printed sweatshirt with gold chains.

"This video is dedicated to one my favorite TV shows of all time," he said on social media about the look and style, referring to 'Fresh Prince of Bel-Air'.

Last August, Mars let on that he was a Cardi B fan. She's the first rapper in history to have her first three Billboard Hot 100 entries in the chart’s Top 10 at the same time.