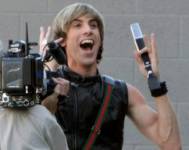 Bruno has been banned in Ukraine because censors are worried Sacha Baron Cohen's raucous new comedy could "damage the morality" of its citizens.

A week before it was set to open, the Ukrainian ministry of culture has told the local film distributor Sinergia that it has "decided to ban all showings of this film on Ukrainian territory."

Among the reasons cited, it says Bruno "contains unjustified showing of genital organs" that is "obscene and improper" and depicts "homosexual perversions" in an "explicitly realist manner."

The ministry concluded that the film included an "artistically unjustified exhibition of sexual organs and sexual relations, homosexual acts in a blatantly graphic form, obscene language, sadism, and antisocial behavior which could damage the moral upbringing of our citizens."

Meanwhile, since the British Board of Film Classification has warned audiences the film contains "strong sex and sex references", Universal Pictures has decided to also release an edited version of the movie to secure a lower rating and help boost audiences.

The 15-rated edit of the movie will be distributed alongside the original cut, which has an 18 certificate (equivalent to an R rating in the US). It cuts out 1 minute and 50 seconds from the original film.

The edited cut will be officially released on July 24. The version currently playing prohibits those younger than 18 from seeing the movie.

Not that the movie has kept away mature audiences. It opened in top spot at the UK and Ireland box office chart with Ł4.98 million.

Universal says it decided to release an alternate version after many theatres "reported turning away large numbers of under 18s keen to see the new film."