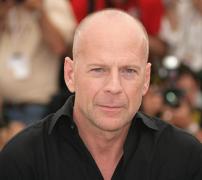 Bruce Willis is glad he got to kiss not one but two beautiful women in his new film 'Red 2'.

"I get to kiss two women in this film, which I seldom get to do in some of my other work," Willis said of Mary-Louise Parker and Catherine Zeta-Jones. "I get to kiss girls!"

"I think I'm very fortunate. I get asked to do a lot of different kinds of things."

Willis, who has been married since to model Emma Heming since 2009 and has a daughter with her, says his wife understands the business.

"Nobody gets mad if you have to kiss someone every once in a while," he says. "You say, 'Look, it's right in the script. It says, 'Now Bruce kisses Mary-Louise Parker... Now Bruce kisses Catherine Zeta-Jones.'"

But Bruce Willis knows when to say 'No'.

"They were trying to get me to kiss John Malkovich, but I drew the line," he laughs. "He was in a dress. Did you see that?"