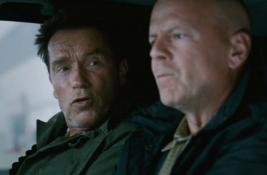 A day after Sylvester Stallone announced he was dropping Bruce Willis from 'Expendables 3' and replacing him with Harrison Ford, new details are trickling out.

"Great News! Been waiting years for this!," Stallone enthusiastically said on Tuesday as he called Willis "greedy and lazy."

Now an insider on the film is saying Stallone decided to cut ties with the actor after he became outraged over Willis' salary demands.

Willis had been offered $3 million for four days of consecutive work on location in Bulgaria. However, the actor now told the crew that he would drop out unless he was paid $4 million.

"A million dollars a day? Stallone and everybody else involved said no," the source tells THR.

"I think he was pretty surprised he was replaced in 72 hours by Harrison Ford — a better actor, a much nicer person and a more interesting direction for the film."

The budget for 'Expendables 3' is around the $90 million mark, similar to previous installments. The first film earned $274 million and the second improved on it with $312 million worldwide.