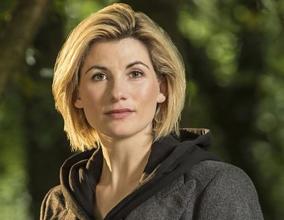 For the first time in more than 50 years, a woman is taking over the starring role in 'Doctor Who'.

The BBC has announced that 'Broadchurch' star Jodie Whittaker will replace Peter Capaldi as the 13th Doctor. She will make her debut in the annual Christmas special before taking over next season.

"I'm beyond excited to begin this epic journey—with Chris Chibnall and with every Whovian on this planet," Whittaker says in a statement. "It's more than an honor to play the Doctor. It means remembering everyone I used to be, while stepping forward to embrace everything the Doctor stands for: hope. I can't wait."

"It feels completely overwhelming, as a feminist, as a woman, as an actor, as a human, as someone who wants to continually push themselves and challenge themselves, and not be boxed in by what you're told you can and can't be."

"Because this is a really exciting time, and Doctor Who represents everything that's exciting about change," she adds: "The fans have lived through so many changes, and this is only a new, different one, not a fearful one."

Chris Chibnall, who previously created 'Broadchurch ' and is the new showrunner, adds: "I always knew I wanted the Thirteenth Doctor to be a woman and we're thrilled to have secured our number one choice. Her audition for The Doctor simply blew us all away."

"Jodie is an in-demand, funny, inspiring, super-smart force of nature and will bring loads of wit, strength and warmth to the role. The Thirteenth Doctor is on her way."

While some men are having trouble with the idea of a female Doctor, Peter Capaldi, who spent three seasons in the TARDIS, has given the casting his stamp on approval.

"Anyone who has seen Jodie Whittaker's work will know that she is a wonderful actress of great individuality and charm. She has above all the huge heart to play this most special part," he says. "She's going to be a fantastic Doctor."