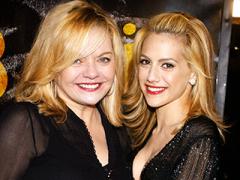 Brittany Murphy's mother, Sharon, is disputing claims made by her ex-husband, based on a new lab report, that their daughter may have been poisoned.

"I have chosen to stay out of the limelight since the tragic and sudden death of my wonderful, talented, loving daughter four years ago," Sharon writes in an open letter in THR.

"I have no choice now but to come forward in the face of inexcusable efforts to smear my daughter's memory by a man who may be her biological father, but was never a real father to her in her lifetime. He has made outrageous statements over the past few years, culminating in this latest madness: that my darling daughter was murdered."

Earlier this month, after years of litigation and obstruction, Angelo Bertolotti was able to obtain samples from the Los Angeles County Coroner's Office for independent testing.

The lab test found ten heavy metals at levels higher that the World Health Organization high levels, which may indicate poisoning. However, Sharon is not interested in pursuing it further.

"In light of the recent publicity about a lab test Angelo had done, I have asked some knowledgeable people, and they tell me that an analysis from a sample of hair is not considered dependable unless it is backed up by tests of tissue and blood and other analysis -- which he did not do," she says.

"The lab Angelo used, if you can call it that, is an Internet site that farmed out the actual testing and then wrote horribly untrue things under the guise of 'analysis'. It mentioned rat poison as a possible cause and claimed to be able to say that a third party murdered my beloved daughter."

"To even mention that the heavy metals that were listed in his test are in rat poison, leading to articles suggesting Brittany ingested that or anything like it, is absurd. If she had, don't you think it would have shown up in the coroner's test of her blood and tissue?," she asks.

"This report conveniently ignores what any good scientist will tell you: A hair sample can be affected by many outside factors, including hair dye, hair spray, prescription medications, foods, smoking the occasional cigarette and environmental factors."

"One cause we now know may have been toxic mold that was eventually discovered in that house -- which may have been what really killed her.
We will never know for sure. However, we do know the Los Angeles County Coroner did extensive tests and found that she died of natural causes. And now she is a real living angel in heaven."

"My theory is that the mother did the job on both of them," he tells 'People'. "Her motive? Money, that's all I can understand about it."

"Why would an old man at the end of his life be trying to profit off of his daughter?," his spokesperson, Julia Davis, says of Sharon's remarks. "The lab is accredited, and we question why Sharon would not want to know what really happened."