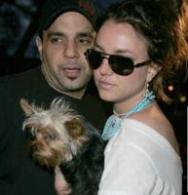 )' mother says her daughter has been drugged and bullied by her self-styled manager, Sam Lutfi, in a bid to take control of her home, life and finances, in the first released court documents.

The restraining order against Sam Lutfi was issued Friday, however, the documents have just been released and the declaration filed by Lynne Spears includes some rather startling allegations, see snippets from the documents below:

Most of the testimony is from the night of January 28, when Britney’s father, Jamie, and her mother, Lynne Spears, went to Britney’s house because they "heard news reports that Britney had just been in a big fight with Sam Lufti."

As soon as they arrived, they noticed Britney wasn't home. Lynne says: "Lutfi had told Britney that Jamie and I were coming to the house to do an intervention, and that Britney panicked and took off." After the fight between Sam and Britney that evening, he had apparently told Spears that "she was an unfit mother, a piece of trash and a whore, that she cares more about Adnan, her current boyfriend, than she cares about her kids, and that she does not deserve the kids."

She says the paparazzi reported to Sam and "addressed him with great respect", like he was "a general."

When Britney returned, she "picked up a bottle of pill sand read part of the label and asked us, “What does insomnia mean?” Sam told her that the pills will help her stay awake."

"Sam told me that he grinds up Britney's pills, which were on the counter and included Risperdal (drug for schizophrenia) and Seroquel," Lynne says. "He told us that the doctor who is treating her now is trying to get her into a sleep-induced coma so that they could then give her drugs to 'heal her brain.'"

When Britney asked: "Can I see another psychiatrist so I can see my babies?" Lutfi responded, "If I told you to take 10 pills a day, you should do what I tell you to see your babies." She then said, “I’ll do anything to get them back.”

At one point during the night, "Sam was screaming at me and Britney said to me, 'Sam treats me like that.' Then she picked up the house phone and said, “Look at the phone, it doesn’t work.'" Lutfi then blamed the dead phone on Britney, even though he had admitted earlier to having the phones disconnected.

Lynne adds before leaving that night, Sam gave her drugs "to make her more light-hearted, happy, and fun."

And when he saw Lynne did not agree with what he was doing, he told her that: "If you try to get rid of me, she'll be dead and I'll piss on her grave."

She sums it up: "Mr. Lutfi drugged Britney. He has cut Britney's home phone line and removed her cell phone chargers. He yells at her. He claims to control everything -- Britney's business manager, her attorneys, and the security guards at the gate."

"Immediate relief is necessary to avoid the risk of physical harm to Britney by Mr. Lutfi and to allow her to undergo necessary medical treatment without interference by Mr. Lutfi," the restraining order request concludes.

A judge signed off on the harassment order Friday, ordering Lutfi from coming within 250 yards of the UCLA Medical Center, where Spears is in the midst of an extended 14-day stay, and her home.

Lutfi is no stranger to restraining orders, and he's received at least three others since 2004.