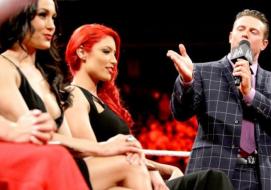 Brie Bella, one half of the Bella twins, is apologizing after flashing her nipple on this week's episode of WWE's 'Raw'.

During the episode from Austin, Texas, the women from Total Divas were brought out with The Miz.

But a wardrobe malfunction ensued with Brie's little black dress and no one -- not even the producers -- realized until after the fact that the Diva showed more than she intended on the live broadcast.

"I apologize for my wardrobe malfunction," Brie said of the dress slip exposing her left nipple (uncensored link).

She blamed it on the Austin heat and faulty dress tape.

"I'm embarrassed and it looks as though the humidity made my tape come off. You'll never see that again!," she said on Tuesday.