Brian Williams & Fallon Slow Jam: Obama Sitting With 'His Bic In His Hand' 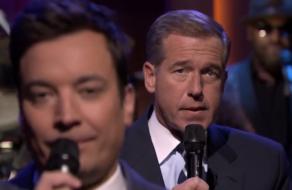 Brian Williams makes an appearance on 'The Tonight Show' to slow jam the news and celebrate his 10th anniversary as the NBC Nightly News anchor.

Jimmy Fallon and Williams jam about President Obama's executive order two weeks ago for temporary legal status for undocumented workers in the country.

"President Obama is taking a hard stance on immigration," sings Fallon. "He wants to let everyone inside. You gotta do it the right way. You can't let everyone in through the backdoor."

"Take it from my man Breezy Weezy. Obama's been waiting for Congress to make the first move so he can whip out his John Hancock and sign a bill."

"And so far they've done nothing. So he's just been sitting around the White House with his bic in his hand."