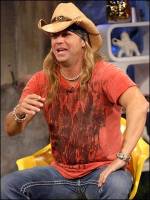 Although Bret Michaels is now said to be in stable condition, he is now at a risk for seizures as he recovers from last week's brain hemorrhage.

The doctors call the discovery a "minor setback," according to 47-year-old Poison frontman's publicist, and are "hopeful that Bret will gradually improve as the blood surrounding the brain dissolves and is reabsorbed into his system, which can be a very painful recovery and take several weeks to months."

The side effect called hyponatremia occurs due to a lack of sodium in the body, which leads to seizures.

"Michaels is in positive spirits. He is responding well to tests and treatments. They are seeing all the tests, hoping the worst is over," adds the rep. "Even though today was a minor setback, doctors remain hopeful for a full recovery. They state he is very lucky as his condition could have been fatal."

Doctors have still not determined what caused the bleeding. Though there has been some speculation about whether Michaels' June 2009 injury at the Tony awards, when a set piece knocked him to the ground, could be a factor.

Michaels' father, Wally Sychak, who spoke to his ailing son over the phone says he "sounded a little slow, but fine."

"He understood what he was saying and knew me. Everything seemed good that way... They say he's moving his arms and hands," he says. "The best as they could expect at this time."

Meanwhile, his Celebrity Apprentice costar Sharon Osbourne says: "It's devastating, and it makes you feel all these different feelings. Your heart goes out to his family, your heart goes out to him. He's the nicest guy in the world. And then you start thinking about your own mortality. You start thinking, Oh my God. It just makes you appreciate how lucky we all are."