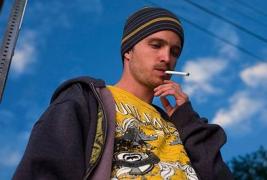 Walter White's signature blue meth from 'Breaking Bad' is no longer a myth.

Kevin Abar, assistant special agent in charge of Homeland Security Investigations, says methamphetamine tinted blue is now selling in the Four Corners region of New Mexico -- where the show was set and filmed.

Abar tells ABC News that distributors are tinting meth blue as a way them advertise and brand their product.

However, the blue meth being sold is nowhere near the purity of the drug on the show. In fact, it's making people sick because of the additional chemicals for the effect.