Brandi Glanville Reveals She Slept With Gerard Butler, Rates Him In Bed 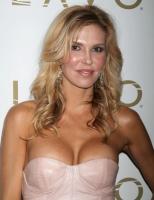 Brandi Glanville has revealed she slept with Gerard Butler after her split from ex-husband Eddie Cibrian.

THe 39-year-old, who has two children with Cibrian, dropped the A-lister's name during an appearance on 'Watch What Happens Live' with Andy Cohen.

"We had a little week of fun," Glanville said with a grin.

Cibrian officially filed for divorce from the 'Real Housewives of Beverly Hills' star after he moved in LeAnn Rimes.

At the time, Glanville blasted the actor for being "a compulsive liar, cheater and a home wrecker."