'Brady Bunch' Mom: I Got Crabs After Affair With New York Mayor 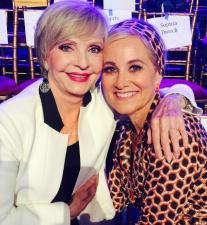 Florence Henderson, who played mom Carol Brady in famous family sitcom 'The Brady Bunch', says she once got crabs after a one-night-stand with a former New York Mayor.

Henderson writes about the affair with career politician John Lindsay in her upcoming memoir, 'Life Is Not a Stage'.

But the affair didn't end right there because Henderson says she went home that night to find "little black things" crawling over her bed and body. She quickly discovered she had crabs, known medically as pubic lice.

Lindsay sent her flowers and a note of apology but Henderson didn't want to take another round of votes with the mayor.

"Guess I learned the hard way that crabs do not discriminate but cross over all socioeconomic strata," she writes. "He must have had quite the active life. What a way to put the kibosh on a relationship."

The now 77-year-old also clarifies that she never had an off-screen affair with Barry Williams, who played her eldest teen-aged stepson, Greg Brady.

"Barry did have a serious crush on me, which I understood and helped him get past," Henderson writes. "Let us just say that if he had entertained a roll in the hay with me, I would never have done it."