Bradley Cooper Talks About Love For 'Frozen', Does Dance Moves For Corden 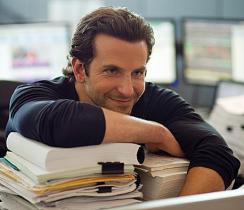 Star of the 'Limitless' TV series Jake McDorman recalls meeting a bulked-up Bradley Cooper on the set of 'American Sniper' and being thrown for a loop when his first question was about Disney's 'Frozen'.

"We're still kind of like, is this a test? Because Southern accent and everything. Is he in character?," says McDorman.

"So we're like. Yeah, copy that. 'Frozen.' Copy that. Sometimes you gotta let it go, man."

Cooper says he liked it so much that he saw it twice on his flight to Morocco.

Cooper also put on a quick demonstration of his dance moves.