Bradley Cooper and Jay Leno Laugh About Posing For Magazines 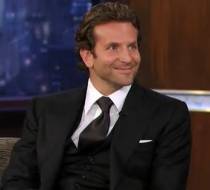 After Jay Leno showed viewers Bradley Cooper's close-up for GQ, the pair laughed about the silliness of posing in photo shoots.

"I mean it's awful," said Cooper. "They make you do these awful things. I mean they make you do things like go on trampolines like 'just jump, just jump up in the air' and they always do this like 'look here, and now take it back.'"

"And every time you do it. You end up doing it!," said Cooper.

"That's it right there," he said of a photo of himself pulling back his hair. "Who does that? Like that's a normal thing. Yeah, I walk down the street and I go like this."

"You know I had that happen once and it goes against your better judgement," agreed Leno. "Like I'm at a thing and the press guy goes 'We've got a see-saw because of the late-night ratings thing.'"