Brad Pitt Quit Drinking After Angelina Jolie Split: 'I Was Boozing Too Much' 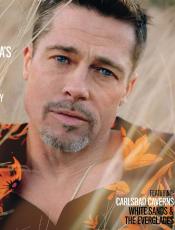 Brad Pitt is addressing his split from Angelina Jolie (photos

), describing it as a "self-inflicted" breakup after 12 years together.

In an extensive interview with GQ Style, Pitt says: "I was boozing too much. It just became a problem. And I'm really happy it's been half a year now, which is bittersweet, but I've got my feelings in my fingertips again."

"Truthfully I could drink a Russian under the table with his own vodka. I was a professional. I was good."

The actor adds he's learning to face his feelings after an upbringing where he was taught to "just deal with it."

"I'm personally very retarded when it comes to taking inventory of my emotions. I'm much better at covering up," he says. "I grew up with a Father-knows-best/war mentality—the father is all-powerful, super strong—instead of really knowing the man and his own self-doubt and struggles."

"And it's hit me smack in the face with our divorce: I gotta be more. I gotta be more for them. I have to show them. And I haven't been great at it."

Pitt says he didn't want to make a public show of his divorce from Jolie because nobody wins.

"I heard one lawyer say, 'No one wins in court—it’s just a matter of who gets hurt worse.' And it seems to be true, you spend a year just focused on building a case to prove your point and why you're right and why they're wrong, and it's just an investment in vitriolic hatred."

"I just refuse. And fortunately my partner in this agrees. It's just very, very jarring for the kids, to suddenly have their family ripped apart."