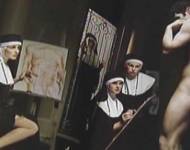 Catholic groups in Boston have attacked an ad for a local health club, which features nuns looking at and drawing a naked man.

The two-page ad is the first thing readers see when they open up January's issue of Boston Magazine. It features three nuns, one wearing a garter, painting the chiseled man while a fourth nun watches from behind a gate.

The Catholic League, the Archdiocese of Boston and the Catholic Action League of Massachusetts say the ad for 'Equinox Fitness Club' is callous and offensive.

The health club insists the ad: "captures the energy and artistry of the well-conditioned body in a thought-provoking fashion, blending fantasy and impact," adding, "throughout history the body has been considered a form of art."

Check out the ad and a clip covering the story below: