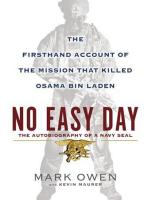 A book from one of the Navy SEAL members who was part of the operation that killed Osama bin Laden is set for release on September 11.

'No Easy Day' will reportedly detail a firsthand account of the operation by Mark Owen, a pen name by the SEAL who was involved in the raid.

However, the book is also causing an uproar over the possible public release of classified information leading up to the night in the terror leader's compound in Pakistan.

The CIA and Defense Department officials have not cleared the project from publisher Dutton, a division of Penguin.

Since the book will also include the soldier's life from childhood and other missions, it wouldn't take much effort for the military to narrow down the identity of the SEAL team member since special operations forces must sign nondisclosure agreements.

However, if the book tells the tale in a general context and the job, without revealing sensitive information about the May 2011 raid, the SEAL member could be in the clear.

Meanwhile, Oscar winner Kathryn Bigelow's film about the raid, 'Zero Dark Thirty', is scheduled for a December release so that it doesn't interfere or serve as a reelection platform for President Barack Obama.