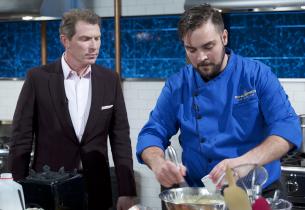 Twelve returning Chopped champions will bring their culinary talent back to the kitchen, as they are tasked with making meals from a basket of mystery ingredients.

However, in this Bobby Flay edition of the popular Food Network hit, the basket will include a surprise ingredient chosen by the celebrity chef himself/

Flay will also joins host Ted Allen and a rotating Chopped panel on the judges table. The winner of each of the three heats will move on to a grand finale to see who will win $15,000.

The winner will then go up against the host 'Beat Bobby Flay' himself in a bonus round to earn an additional $25,000.

The special tournament will begin on Thursday, October 20.