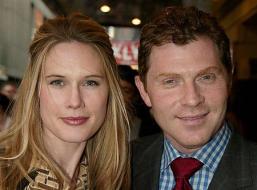 Bobby Flay, who filed for divorce from his actress Stephanie March earlier this month, is denying allegations that he cheated on his wife.

The New York Post reported that Flay, 50, had been cheating on the 'Law & Order: SVU' actress with 28-year-old Elyse Tirrell, who worked as a hostess at the chef's Bar Americain and became his assistant.

The paper says March "learned of the betrayal shortly after Thanksgiving" that Flay has been having an affair for three years.

"She came to my house and was sobbing uncontrollably," says actress friend Maia Madison Madison. "She said, 'I can't believe the last 10 years of my life have been a lie."

"Elyse had always seemed so nervous when Stephanie came to one of the restaurants, and Stephanie, not knowing what was happening, went out of her way to compliment her and try to make her more comfortable. Elyse had even been to Stephanie's home when she was there — and when she wasn't."

"Now this girl is about to become the Monica Lewinsky of the food world."

Julie Halpin, a spokeswoman for Flay, would not confirm or deny the affair except to say: "We will continue to refrain from responding to the continued efforts by certain parties to spread rumors and innuendo."

"This specific allegation was in a letter sent from one attorney in this case to the other. It was written and then leaked specifically to try to insert this story into the press, and that's unfortunate."

"Even more unfortunate is that all of this is being done in order to renegotiate a prenuptial agreement that was agreed to over a decade ago and never amended during the marriage."