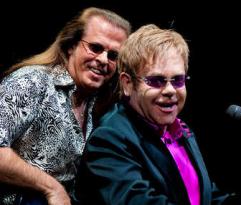 Bob Birch, a bass player best known as a long-time member of Elton John's band, has died of an apparent suicide. He was 56.

Birch was found in his San Fernando Valley home with a gunshot wound to the head, according to Ed Winter of the Los Angeles Coroner's office. Officials say the case is being investigated as a possible suicide but reveal a suicide note was not found at the scene.

The bassist contributed to many of the pop star's hits over the years, including his hugely successful tribute to Princess Diana titled 'Candle in the Wind'.

John says he is "devastated and shocked" by the loss of his friend, who had been a member of the band since 1992.

"To me Bob was family," he says in a statement. "He had been a member of my band for 20 years; we played over 1400 concerts together."

"He was one of the greatest musicians I have ever worked with, and in all our years on the road he never played or sang a bad note. I cannot find the words to describe this tragic death, and how much I loved him. May he rest in peace."

Birch is survived by his wife, Michele, and a son, Jonathan.