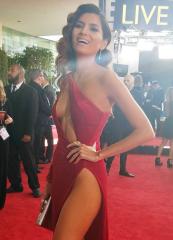 Blanca Blanco is explaining why she didn't wear black as a statement against sexual misconduct in Hollywood.

In fact, the only two women who didn't wear black were German model Barbara Meier, who wore a black-tinted floral gown, and Blanco.

"If we now restrict this, because some men can't control themselves, this is a huge step back in my opinion," explains Blanco.

"I love red. Wearing red does not mean I am against the movement. I applaud and stand by the courageous actresses that continue to break the cycle of abuse through their actions and fashion style choices."

"It is one of many factors leading women to a safer place because of their status. I am excited about the #TimesUp movement; true change is long overdue."

"It hurts my feelings, but I guess it's part of being in our industry," she says of the criticism. "We have people who appreciate you and others that don't."

"The designer Atria Couture did an amazing job with my dress and I appreciate them for dressing me. Shaming is part of the problem. The issue is bigger than my dress color."