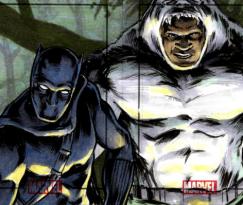 Boseman will play T'Challa, the prince of the African nation of Wakanda, who was introduced in 'Captain America: Civil War' and must take over after his father is murdered.

In the comics, M'Baku is Wakanda's greatest warrior second only to the Black Panther. He was involved in the plot to usurp the throne with the help of the outlawed White Gorilla cult who were ancient rivals of the Black Panther cult.